I’ve crawled out of my depression from losing my main blogging prep note to bring you my notes from April! I sat down the other night, started writing as much as I could remember, and managed to come up with a pretty good (maybe even better) draft for this post. So read on to see the 3 goals I set for myself last month…

Before we get into those though, can we take a minute to fathom how on point my tarot reading was the other day?? I lost my note completely and I was devastated… 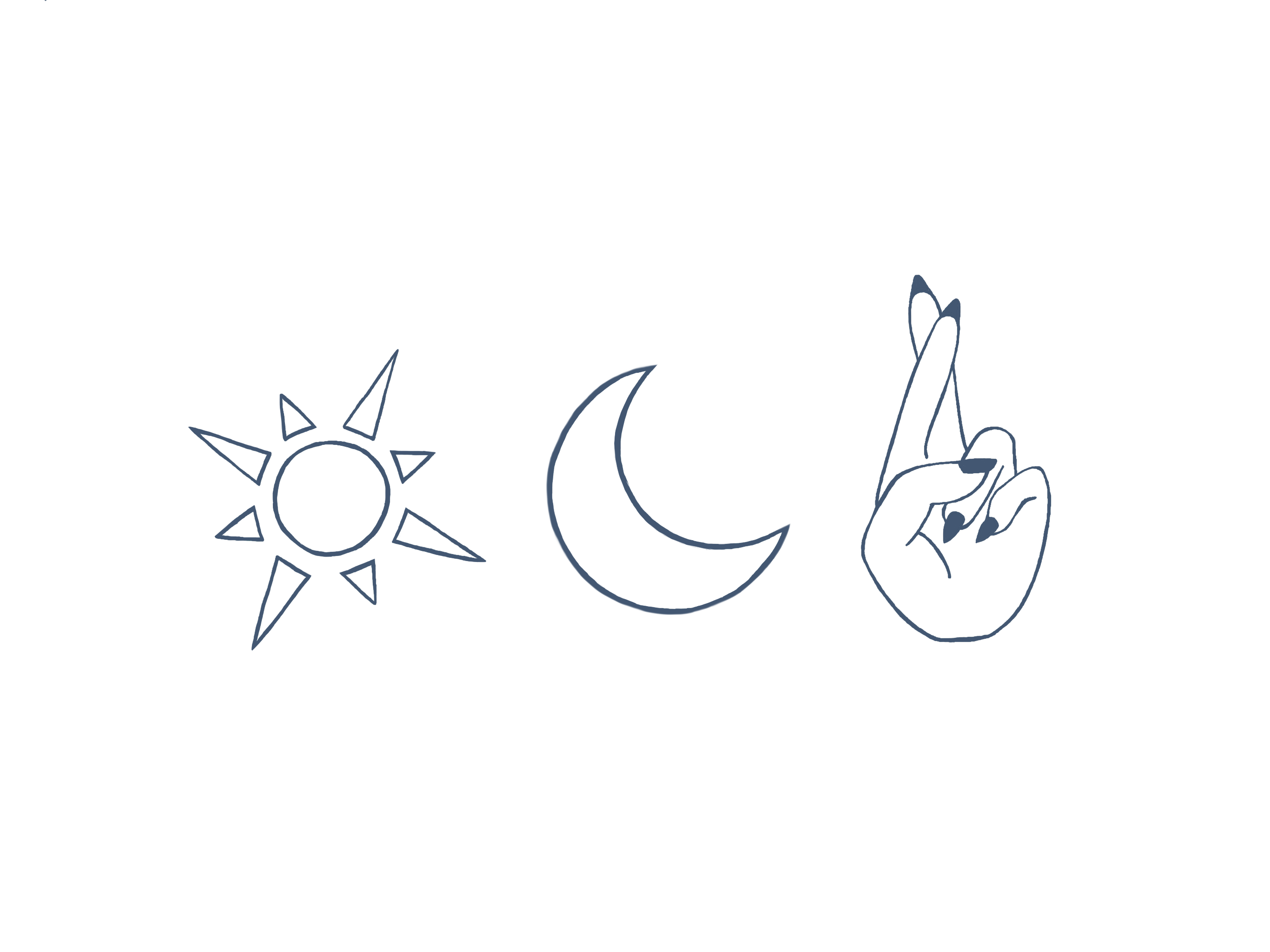 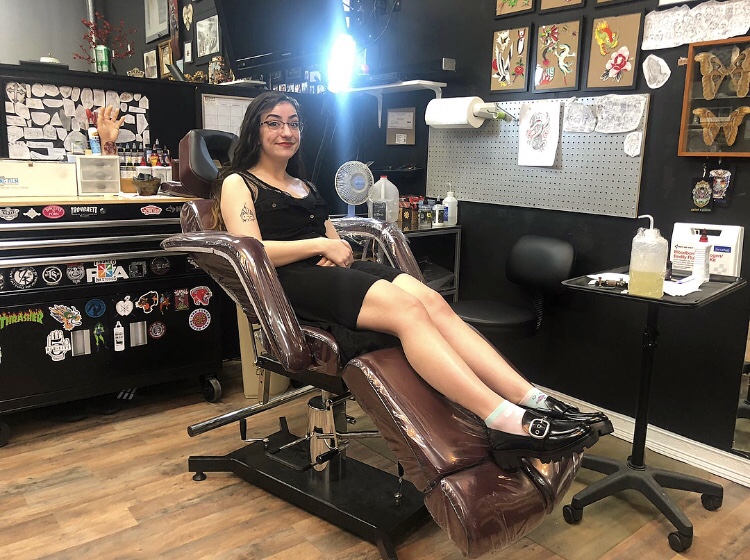 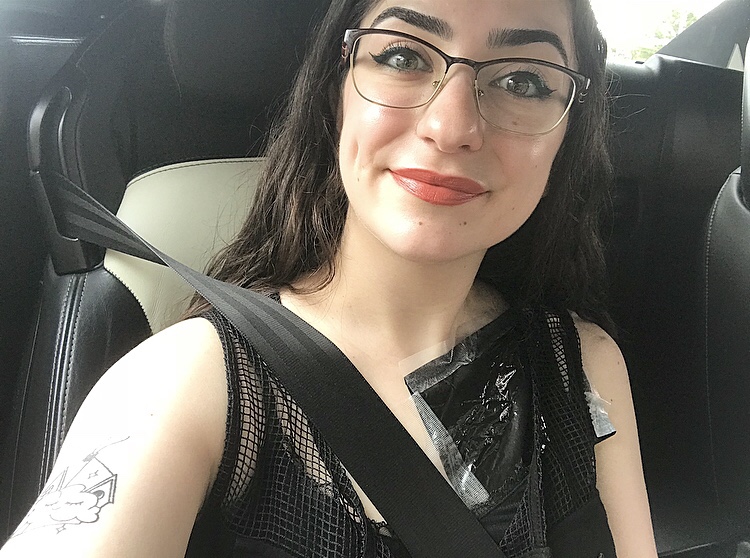 Get my next tattoo

I had been in contact with Tobias before about the design I created for my next tattoo. We had discussed size, placement, and cost all a month or so before I finally decided to get it. I then scheduled an appointment with him for the 8th of April. I even put a deposit down on their website! I was READY, very excited, and looking forward to having more of my own art tattooed on me by one of my friends (: 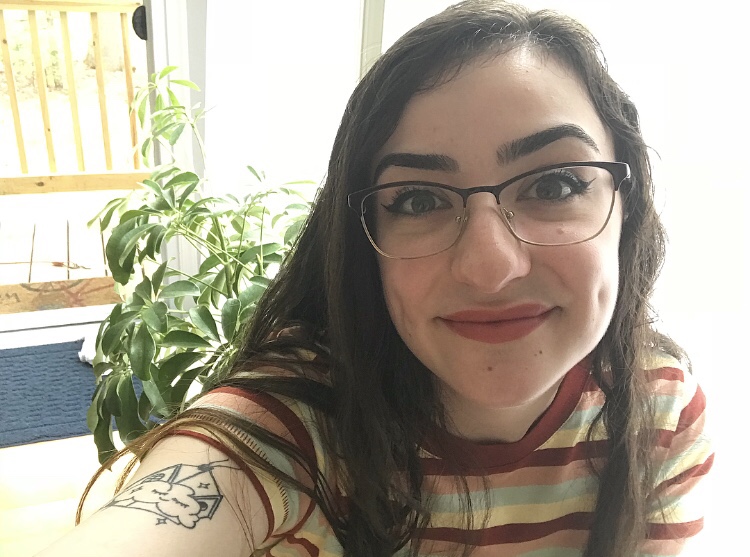 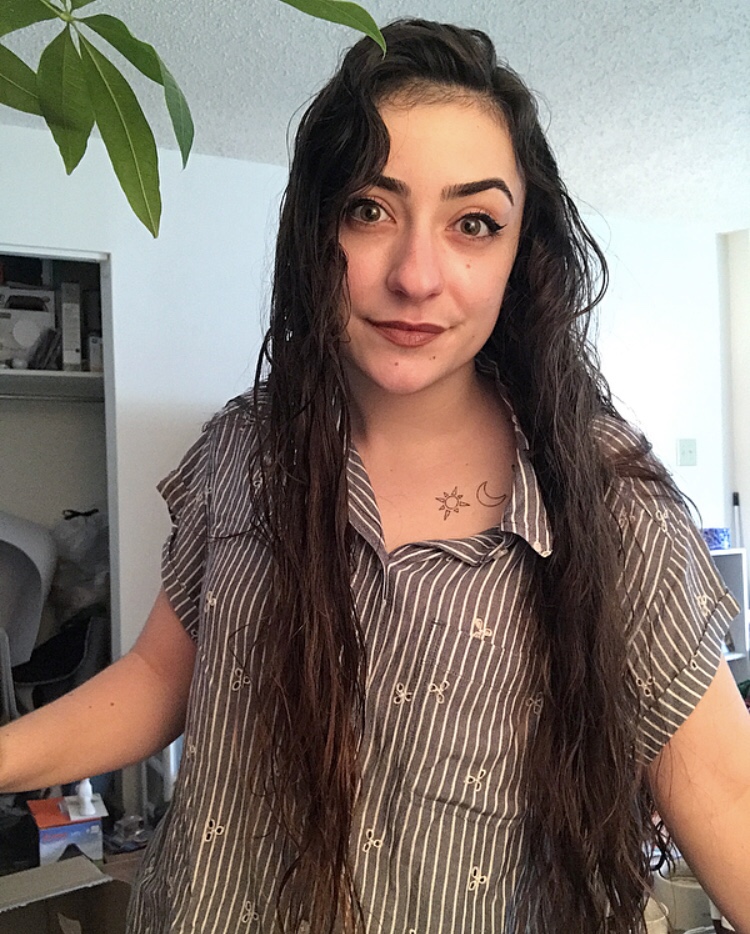 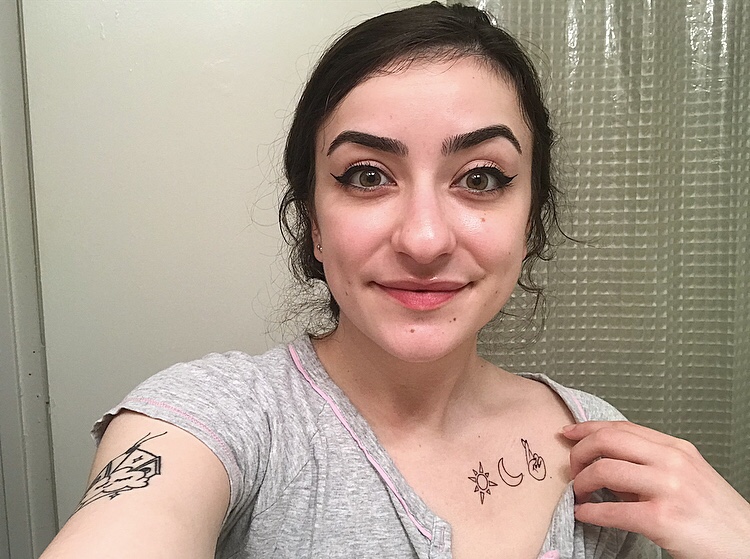 Showing off my first & second

We went for a very thin outline and kept it small at about a half dollar size. For placement I was initially thinking right under my collarbone, but the inside of my forearm was a tempting spot too. After a bunch of outfit changes the night before, I found something to wear that would make it easy for him to access my collarbone area without me having to take my top completely off. Because of the size and angle we had to work with- it does fall a bit under my strap, but depending on what I’m wearing it can show fully. It was much more uncomfortable sitting in the chair with my head up and tilted to the side for an hour, than the first one I got which was just on my upper arm. I wouldn’t say it hurt any more or less though- it was still the same annoying, scratching feeling the whole time and of course the slight burn whenever he wiped it off during the process. The whole thing took an hour or so, and it looked great!

I was super happy with how dainty it came out. He said since he did such a light line, it would most likely be even thinner after healing so I’d have to come back for a touch-up session (free of charge). Which I was totally fine with since I’d rather it have to be tweaked later than messed up on the first try. The care for this was just as simple as the first *obviously* but it was a bit more difficult to do without getting my whole chest wet. It took less time to heal since it was less ink and thinner lines. The meaning behind this one is very simple and something I’ve wanted a tattoo of for a long time. It’s a sun, moon, and crossed fingers symbolizing the Buddhist saying “Three things cannot be long hidden: the sun, the moon, the truth” which you may recognize if you’re a big fan of the MTV show Teen Wolf as it’s used multiple times as a mantra to calm the wolf inside & maintain control over oneself. I’ve been loving pairing my Notte necklace from Maì with outfits even more as the stars & moons match so well with my tattoo! 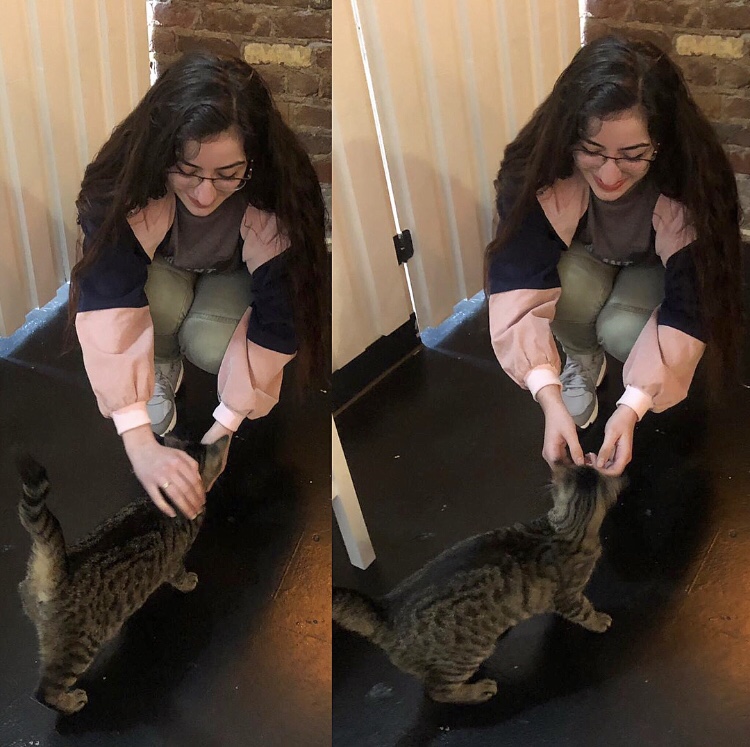 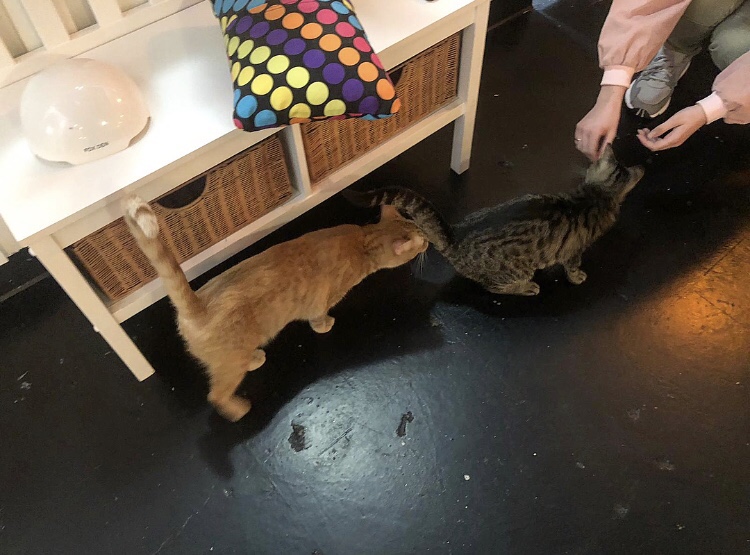 I’ve seen so many pictures on Instagram and videos on YouTube of people visiting these cute cafes that house a bunch of kitties. I really wanted to visit one, but assumed there weren’t any in our area. Since summer is coming up and my mind is running wild with vacation ideas, I decided to look up the closest cat cafe to us. I was thinking maybe we’d have to drive a few hours away for the day to go there, but I found one right here in the heart of our city! I took a look at their website and saw they’ve got a bunch of kitties and even offer a free drink with your visit. I knew at once I wanted that to be one of my goals for April. I would have to find a day off and schedule a time slot for us… 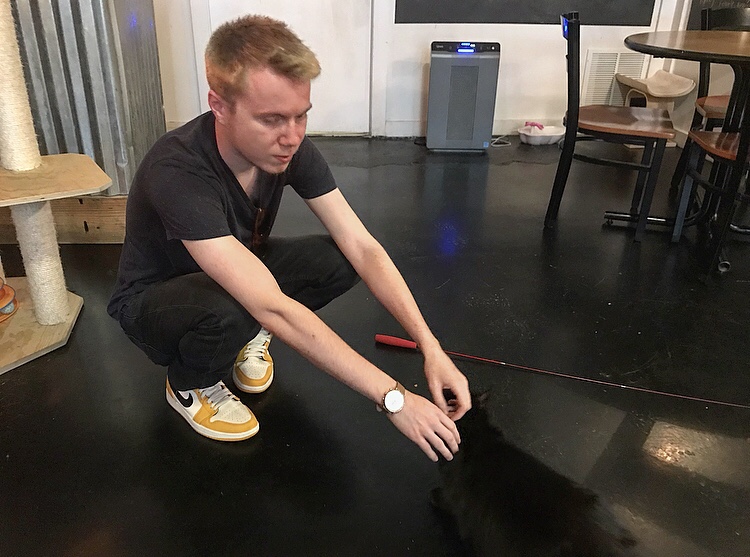 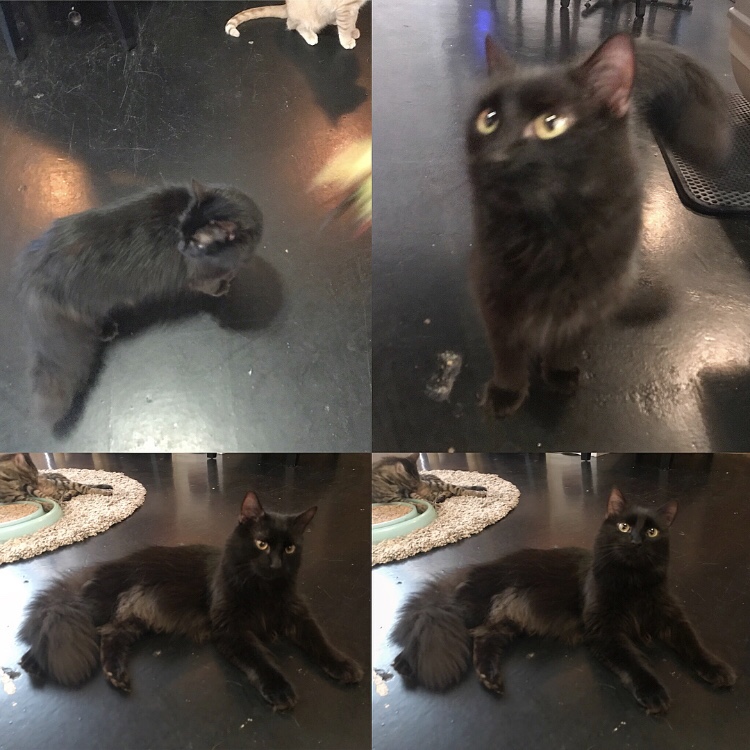 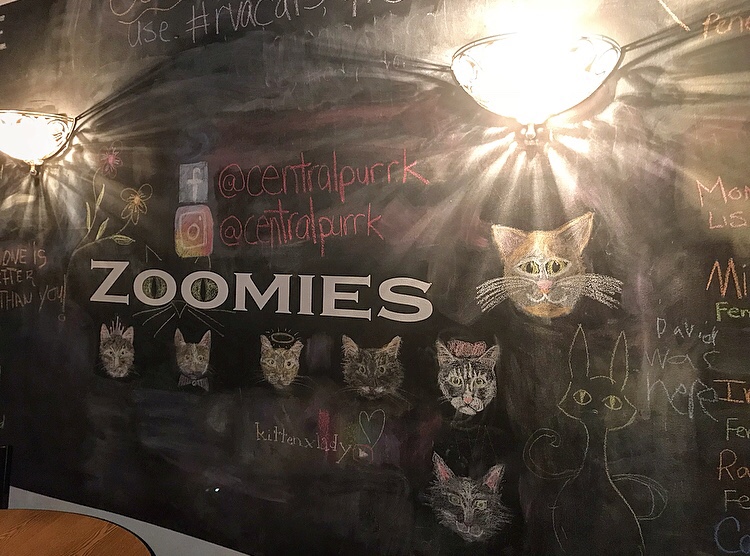 We ended up going close to the end of the month, on the 26th. I chose an hour long visit at noon that Friday. The man at the front desk informed us that all the cats are available for adoption and they’re separated into two rooms. We learned that one side had smaller/younger cats and the opposite through the door to the other room. The building itself was very nice and it surprisingly didn’t smell at all like it housed a bunch of felines. They had tables & chairs, board games & books, and of course plenty of toys for the cats to play with. The only thing I’d criticize is the music was a bit loud which was strange to me. I think they may wanna turn it down or play something a little more chill- to keep the kitties calm and give it more of a coffee house vibe… 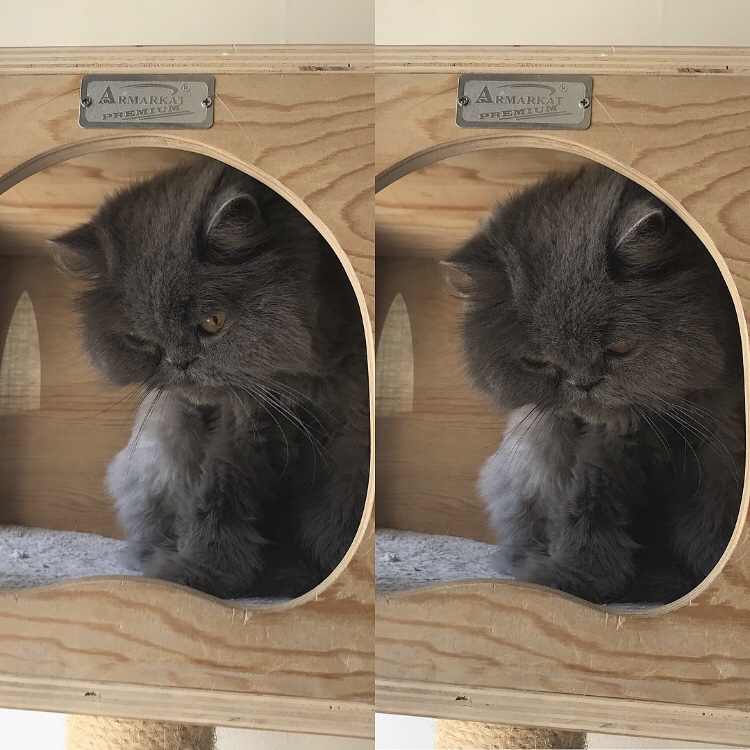 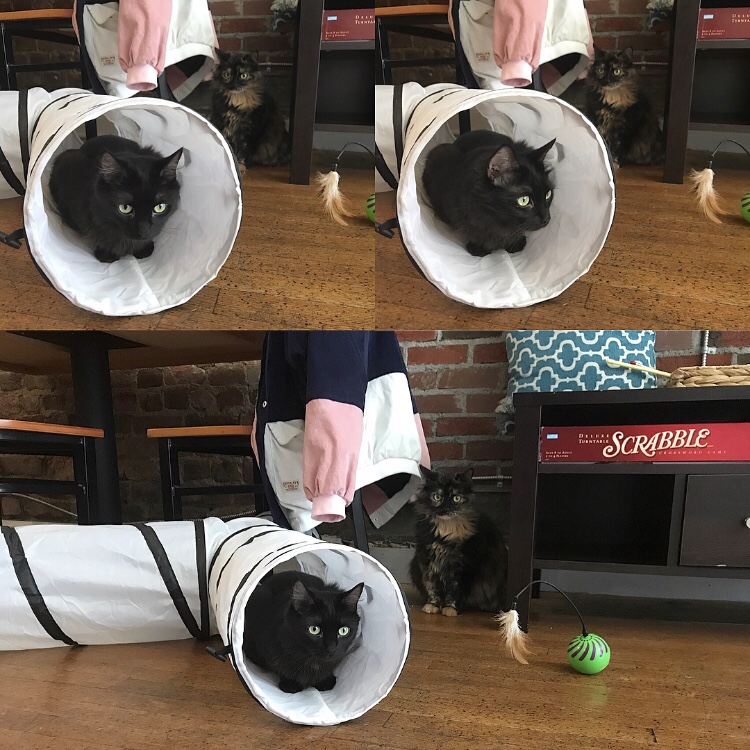 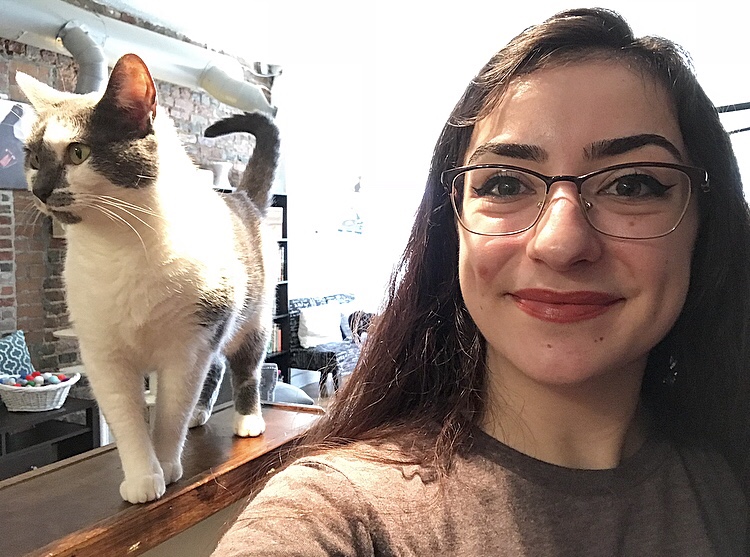 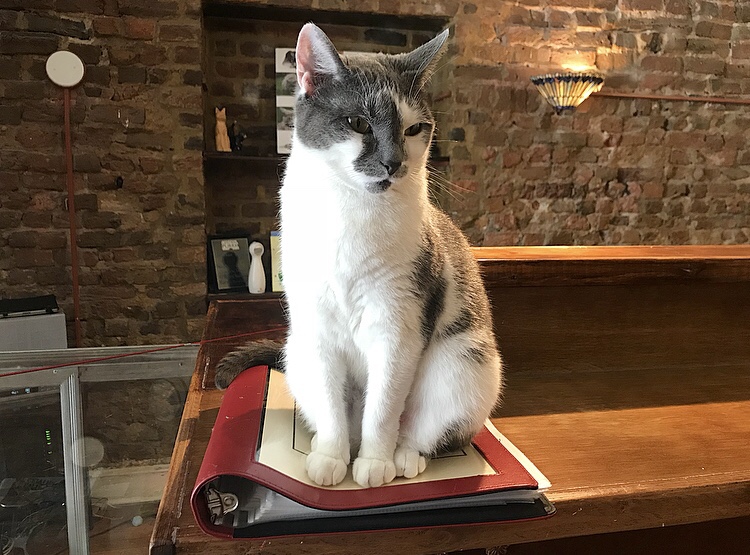 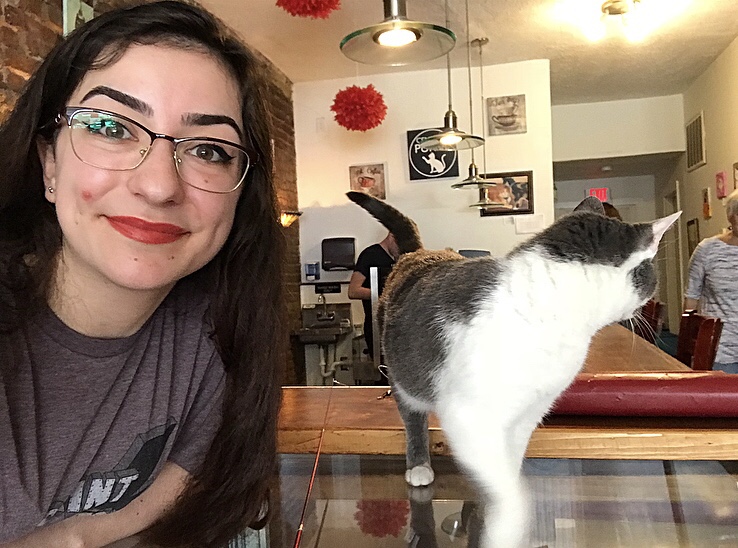 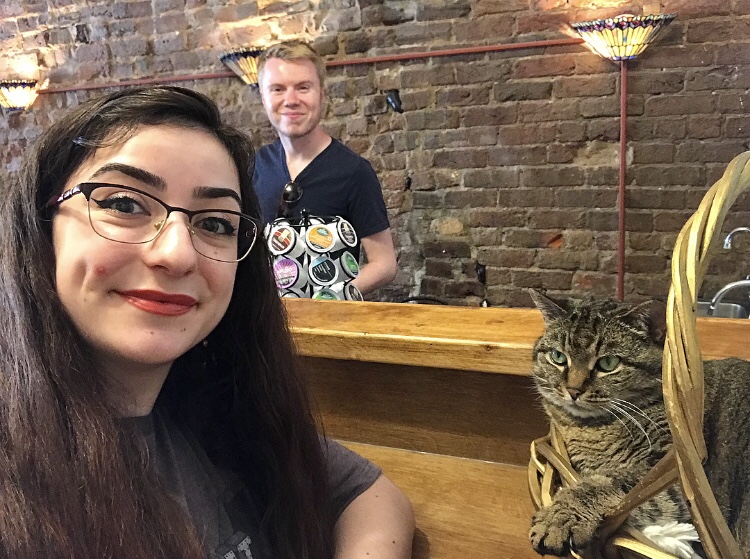 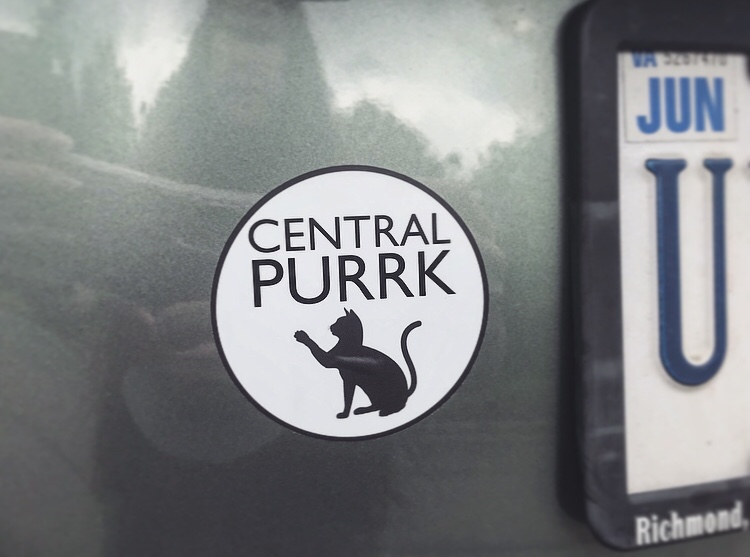 They were all so adorable! A lot of the smaller ones ran away or tried to hide, but most of them wanted attention and cuddles. The larger and older cats mainly just wanted to lounge, but they definitely weren’t opposed to being pet. In this room, there was a bar with a mini fridge full of sodas and a Keurig to make yourself a coffee or tea (the drink that comes free with your time slot). Each side had a binder full of information about all the kitties. It came to our attention that some of them were bonded for life and must be adopted as a pair. We didn’t go there to adopt, but I hope we can go back again soon just to visit the fur babies. I know Justin really wished we could’ve brought home the cat in the basket. We both liked that one a lot. Unfortunately we can’t take on any pets at the moment, but I’d love to adopt from Central Purrk when we’re ready! It was such a lovely experience altogether- I even picked out a bumper sticker on our way out to hopefully spread the word that we’ve got a cat cafe right in our neck of the woods!

I’m still not back to 100% with my shoulders yet. The medicine I have is working for the most part, but I wanna heal them as much as I can to avoid further injury. So I knew I had to keep track of my physical therapy exercises in order to stay consistent. I wanted to do them every single day for April, but because my shoulders are healing- those stretches left them a bit sore…

So I *revised* my goal to doing them 5 days out of each week. This worked out pretty well and I usually ended up doing them before bed. I’m hoping not doing push-ups is helping heal my shoulders enough that I won’t have to keep the physical therapy up for much longer, but it’s not a hassle for me to do it. Sometimes I just forget! I am running low on my medication though, and my doctor wants me to come in for an appointment before she’ll refill anything. That includes the muscle relaxer I use to help me fall asleep. I would rather not go back to her cause I feel like she’s been pushy with the alternatives like laser & massage therapy- which are quite expensive. I just know that what I’m doing now is working, so it’s disappointing I’ll have to go back and tell her “all is good” and spend another $30 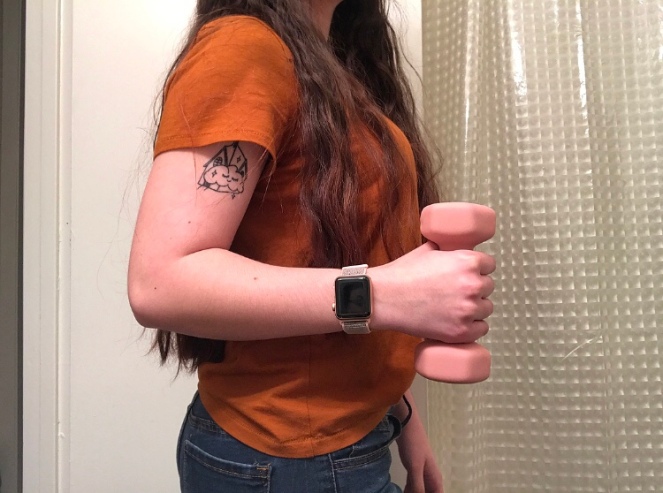 The pictures I got are weird cause it’s kinda difficult to show myself doing the exercises. But I basically stood with my side to a wall or door and slid my hand up until I reached a comfortable point (not past that), then held for 5 seconds & came back down. I’d do that 5 times with each arm and then do the same thing but facing towards the wall/door with my arm straight in front of me. I’ve also tried using a weight in one hand and doing small stretches with that, but I don’t wanna over-do those exercises since I’m already doing bicep curls with my daily workout.

In order to avoid the constant doctor visits and prescriptions, I asked my pharmacist if she knew of anything better than Tylenol that I could take over-the-counter for my pain. Surprisingly, she recommended CBD oil and said that a lot of people she knows have really benefitted from it. I didn’t want to use an oil specifically, but Justin found an awesome lotion that might work wonders for my shoulders. He researched it and listened to a podcast where people talked about the brand itself. It seems like one of the best ones out there and the price suggests it! Hopefully we can order a bottle soon and test it out. I’d never thought I’d be one to campaign for it, but I might just be if it helps me put down the pain pills. I’ll keep you all updated here on how it goes (:

…and those were my April notes. I hope you enjoyed a look through me achieving my goals from last month. I’ve already got 3 more planned out for May, and I’m very excited to get them done & show you all! Thanks so much for reading (: